Those of us that have extensive experience building FDQM integrations have long used either the event scripts or customization within the load action in the FDQM workbench in order to execute standard and/or variablized essbase calculation scripts. This almost always got the job done, but was not easy.

Fast-forward to the current era of FDMEE, and there exists a robust feature which allows FDMEE to pass many different variables and execute calculation scripts at different points in the FDMEE workflow process.

As can be seen in the above image, each Target Application has its own Calculation Scripts tab, which allows scripts to be executed by data rule, location, category or application with a few different options for timing. The options are:

The Scope Entity field is the data rule, location, category or application that the script needs to run for. Script name must contain the exact name of the essbase calculation script as it exists on the essbase server.

The other important thing is understanding how to set and pass variables. This is done through clicking on the calculation script paramter pencil.

From here many options exists to pass variables into the FIX statement of a calculation script. 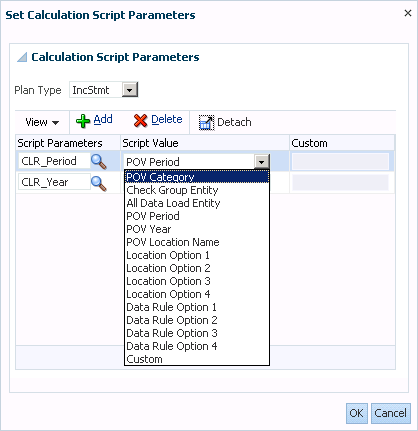 Now that the FDMEE side setup is covered, the final step is to ensure the calculation is ready to accept the variable. The FDMEE script parameter such as “CLR_Period” above, must be properly referenced in the calculation script in Essbase using the SET RUNTIMESUBVARS command. 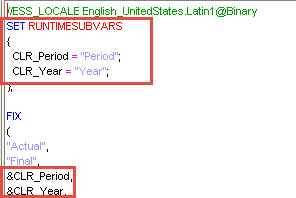 There we have it! Simple, intuitive FDMEE to Essbase calculation script integration.

About the Author: Eric Milbrandt

Eric Milbrandt has been in Finance and Technology roles for over a decade, the latter half has been with eCapital since 2013 where he serves as a project lead and lead developer. Eric is Oracle certified in Hyperion Planning 11 as well as Essbase 11 and has experience working with resources in all corners of the globe through all phases of the implementation process. Eric has also delivered custom FDQM and FDMEE solutions and is passionate about creating dynamic low-maintenance solutions to achieve the most value for his clients.