If you are deploying an attribute dimension assigned to a ragged sparse base dimension (ragged, meaning the lowest level is not equivalent to the highest generation) within Essbase version 11.1.2.1, you may have trouble deploying from EPMA into Essbase.   There is no associated error message and the deploy itself completes successfully.  A close examination of the outline in Essbase will reveal that the attributes in Essbase do not match the attributes in EPMA.  Attributes exist for some level 0 members in the base dimension, but not others.

To be more specific, this behavior occurs when the following criteria are met:

This functionality actually worked in previous versions of Essbase, but became an issue in 11.1.2.1.  This is not an issue in 11.1.2.2 and forward.  This issue can be fixed by patching the environment to the 11.1.2.1.600 release or later.  It is highly recommended to consult the Oracle EPM Compatibility Matrix and patch all installed products to ensure version compatibility. 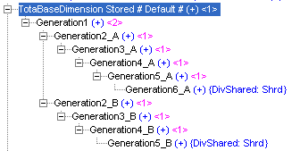 After installing the patches appropriate for your environment (based on installed products), restarting the environment, and re-deploying from EPMA, attributes will now populate correctly into Essbase.